On August 28, 2016, MOHAN Foundation along with Artemis Hospital was invited for a talk on organ donation at an event organized by Bangiya Parishad Gurgaon in Sector 56, Gurgaon.

Bangiya Parishad Gurgaon is an association of Bengalis in Gurgaon. It was formed in the year 2006 with the objective of creating a ‘home away from home’ for Bengalis in Gurgaon. They periodically organize cultural and social activities for its members. This session was organized along with a blood donation drive. The initiative was taken by one of the members, Mr Partha Dey.

Ms Pallavi Kumar along with Dr Ramdip Ray (Surgical Gastroenterologist, Liver Transplant Unit, Artemis Hospital) went for the session. Since there was no scope for a presentation, it was kept more as an interaction. While Dr Ray touched more upon the transplantation issues and shortage of organs, Pallavi spoke about organ donation and how one could go about it. Brain death was discussed in detail and so was corneal donation.

In the light of the recent kidney scams, many of the people present brought up queries and their concerns on the proper usage of organs. The same was discussed and the need to have a certain degree of trust in the process was stressed upon. Everyone present agreed that if good has to be done, then there has to be faith.

It was a very involved group of people and very passionate about the cause. Despite the oppressive heat in the open tent, the discussion went on for over an hour.

About 50 people attended the session and most of them picked up donor cards for themselves and their family members. 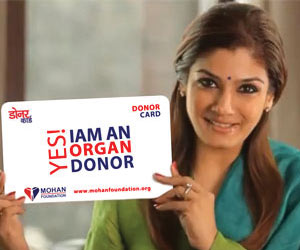